Remains of a defensive structure built more than 3,000 years BC were discovered near Lviv 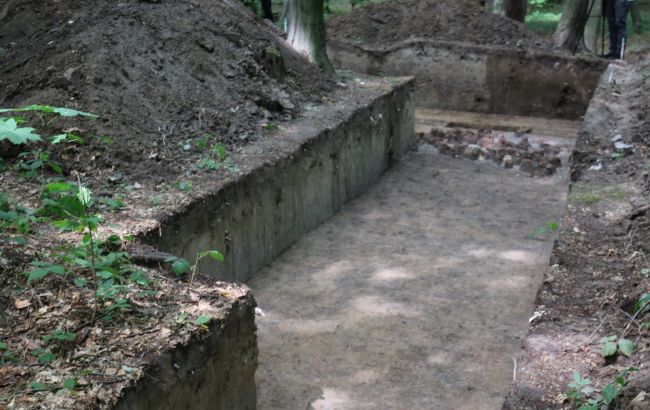 On Mount Lysivka in Vynnyky, Lviv region, archaeologists discovered a fragment of a defensive fortification that was built around 3500 BC.

This was announced on the website of the Lviv Regional Council.

Researcher of the Department of Archeology of the Institute of Ukrainian Studies named after I. Krypyakevych of the National Academy of Sciences of Ukraine, Andriy Havinskyi said that this is the oldest fortified settlement of the Eneolithic era. And it became the oldest of the three previously discovered in western Ukraine. Havinskyi has been conducting research in the hills near Lviv for almost 10 years. He noted that Tripoli fortified hillforts are known on the territories of Romania, Moldova and Ukraine. The peculiarity of the new find is that it was created by builders - representatives of the Lycha culture, not the Trypil culture.

Цитата:
"We can see the remains of a wooden wall. First, a ditch 30 cm wide was dug. It was dug very evenly, which indicates the presence of special tools even then. The logs in this ditch were driven in close to each other. And the outside of the palisade was plastered with clay, it sealed fence. We can conclude that it was a strong, impregnable fence with a height of about 3 meters," the archaeologist said. Many years of research have allowed us to find a lot of artifacts that testify that the ware ware culture bordered on the Tripoli culture and the Vynnyk territory is exactly the border of these two cultures.

Archaeologists consider the defensive settlement of the Eneolithic era a sensational find and plan to excavate the second line of the palisade. There is an assumption that it is nearby, a few meters away.

Remains of a defensive structure built more than 3,000 years BC were discovered near Lviv
On Mount Lysivka in Vynnyky, Lviv region, archaeologists discovered a fragment o...

A Polish restorer bought and brought thousands of first-aid kits to Ukrainian soldiers
Anya Kudzia, a restorer of works of art and a teacher at the Warsaw Academy of A...
Не забудьте підписатися на Наш канал: